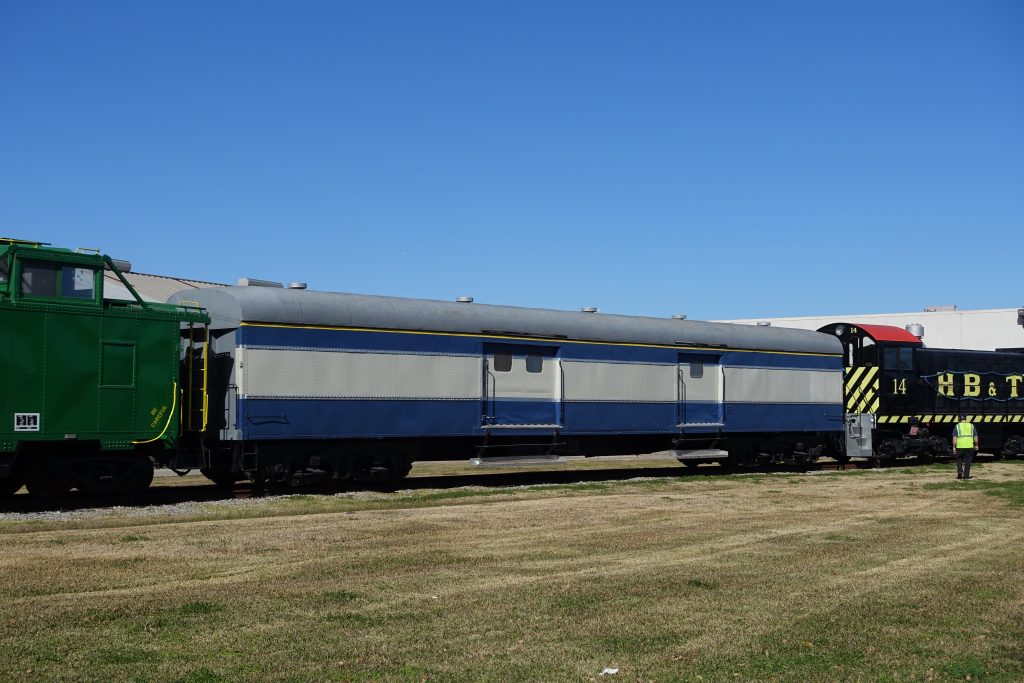 Baggage/express car No. 1114 had a long life on the Texas & Pacific and its parent Missouri Pacific Railroad, according to information generously provided by the Missouri Pacific Historical Society.

Built in 1920 by The Pullman Co, the heavyweight car was one of 12 in a series numbered 1105 to 1116. As constructed, the car was typical for its day, with a clerestory roof and six-wheel trucks.

Starting in 1954, all of the cars in the series were cycled through the railroad’s Marshall, Texas, car shops for rebuilding. The Marshall Shops modernized the look of the cars with a turtleback roof and new baggage doors with modern windowpanes. At this time, the cars also were adorned with the MoPac’s famous blue and gray Eagle paint scheme. No. 1114 was the last in the series to undergo modernization at Marshall, being released around September 1957.

The car received a new number in the railroad’s early 1960s renumbering program, and then was withdrawn from revenue service in 1963 and assigned to maintenance of way duties. The car was on the property in 1982 when the Missouri Pacific was merged with the Union Pacific, and at some point after the merger the car was transferred to the Union Pacific steam and heritage program for possible use. Subsequently declared surplus to the steam program’s needs, the car was offered to and accepted by Gulf Coast Chapter – National Railway Historical Society, Inc. No. 1114 has served the chapter as storage and support for various restoration projects. In 2015, chapter volunteers began a cosmetic restoration to return the car to its 1957 appearance in Eagle paint.

Official railroad diagrams from 1944 and 1963 of the cars in the series that included No. 1114, courtesy of the Missouri Pacific Historical Society. The diagrams illustrate the changes made when the car was modernized.