The month of September 2003 marked the sesquicentennial of the beginning of railroad operations in the State of Texas. On September 7, 1853, the Buffalo Bayou, Brazos and Colorado Railway Company began operating between Harrisburg, now a part of the City of Houston, and Stafford’s Point, now known as Stafford. With this, the BBB&C became not only the first railroad to operate in Texas, but the first standard gauge line built west of the Mississippi River. It was the second railroad west of the Mississippi River, and the oldest component of the Southern Pacific Railroad until the 1990’s, when SP acquired lines that allowed it to reach Chicago. 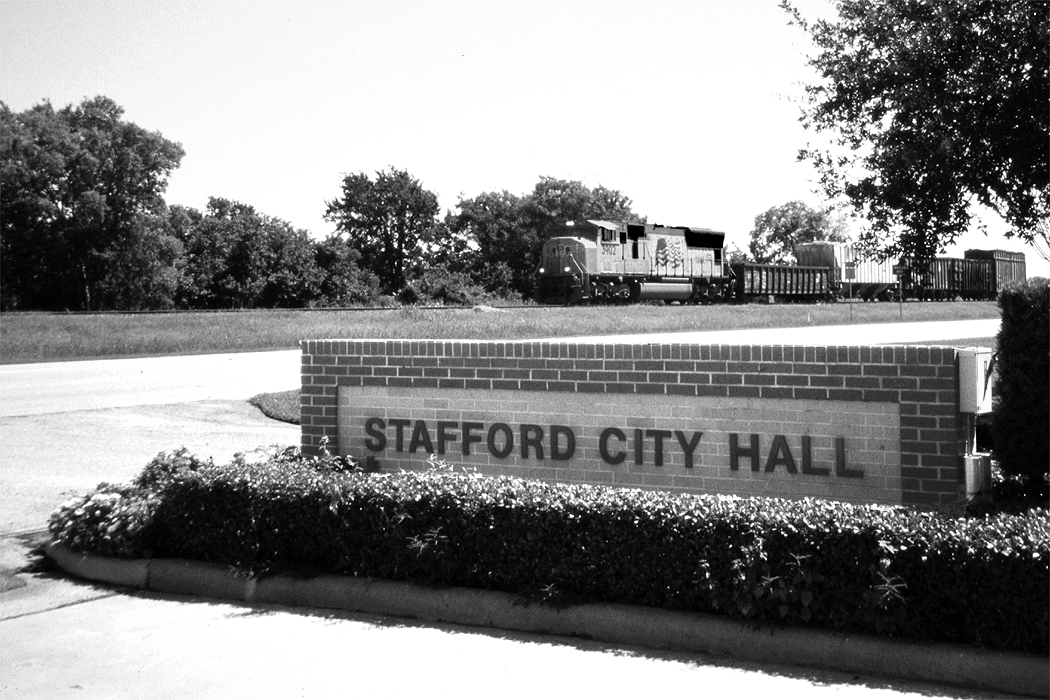 A Union Pacific freight train rumbles past the Stafford City Hall on the BBB&C. The date is Sept.7, 2003, the 150th anniversary of the start of railroad operations in Texas. Photo by Howard Laker.

Transportation in early Texas, like in many other places, was a major problem. Most roads were little more than rutted dirt pathways, muddy during wet weather, dusty when dry. Travel was slow, and also expensive. In 1840 a pound of coffee cost twice as much in Austin as it did in Houston, mainly due to high transportation costs.

Transportation over water was cheaper, but although steamboats were common on a number of rivers, most Texas rivers were unreliable. They had too much water at some times of the year, not enough water other times, and sandbars and log jams. Railroads held the promise of greatly improving transportation in the future.

The Republic of Texas granted four charters to build railroads, the first one in 1836, less than ten years after the first public railroad in the United States was chartered. However, none of the companies were able to construct a railroad.

One of them, the Harrisburg and Brazos Rail Road, was planned in 1839 by Andrew Briscoe, the first chief justice (county judge) of what is now Harris County. It was to run from Harrisburg, on Buffalo Bayou, to the Brazos River at Richmond, a rich agricultural area. Briscoe was agent for the Harrisburg Town Company, and revenue from sales of lots in Harrisburg was to be used to help finance the line. About two miles had been graded and laid with ties when the project was abandoned in 1840.

Successor to the Harrisburg and Brazos, the Harrisburg Rail Road and Trading Company was chartered in 1841 with Briscoe as president. It was also unsuccessful.

Sidney Sherman, a hero of the Battle of San Jacinto, allied with a group of Boston capitalists, acquired the Harrisburg Town Company, which led to the Buffalo Bayou, Brazos and Colorado Railway Company being chartered on February 11, 1850. It was incorporated by Sherman, his group of Boston investors, and others, including William Marsh Rice, a Houston merchant later to become a millionaire and the benefactor of what is now Rice University.

Construction began in 1851, along the route of the earlier-surveyed line from Harrisburg towards the Brazos River, and proceeded steadily, at a cost of $18,400 per mile. Stafford’s Point, a settlement that had grown up around the plantation of William Stafford, twenty miles from Harrisburg, was reached in August 1853.

On September 7, 1853, for the first time in Texas, operations began. The Galveston News reported in September 1853 that the train would run between Harrisburg and Stafford’s Point each Wednesday and Saturday. By January 1, 1856, the BBB&C finally reached the east bank of the Brazos River across from Richmond. In December 1857 the Houston Tri-Weekly Telegraph reported there were no boats on the Brazos River, since the railroads were handling all of the business.

In 1868 and again in 1870, the BBB&C was sold, and later in 1870 the Galveston, Harrisburg and San Antonio Railway Company was incorporated as a reorganization of the BBB&C. The line kept extending westward, until in 1883 it met construction forces building from El Paso at a point 227 miles west of San Antonio, completing the Sunset Route from New Orleans to California.

In 1885 the GH&SA was leased to the Southern Pacific. Now owned by the Union Pacific Railroad, the route of the Buffalo Bayou, Brazos and Colorado, Texas’ first railroad, is heavily used today and still an important railroad line.