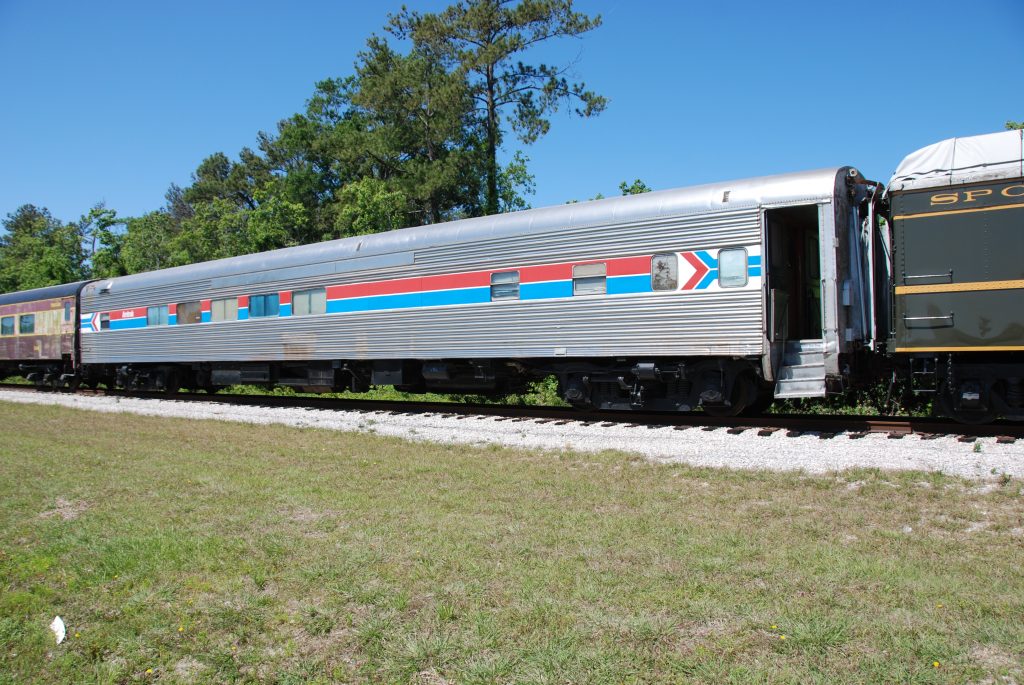 The lounge car resplendent in its restored Amtrak Phase 1 colors. The exterior cosmetic restoration was completed with funding assistance from Houston Endowment.

No. 1344 was built for Santa Fe’s famous Super Chief, known as the “Train of the Stars” because of the many celebrities who travelled on the streamliner between Los Angeles and Chicago.

In 1948, the Atchison, Topeka & Santa Fe Railway ordered new lounge, dining and sleeping cars for the premier all-Pullman Chicago to Los Angeles train, the Super Chief. Due to the post-World War II backlog at car builder Pullman Standard, many of the cars, including lounge-dormitory car No. 1344, were not delivered until 1950.

As originally configured, the 1950 Super Chief carried the lounge-dormitories behind the new dining car. The famous Turquoise Room dome-lounge car ran just ahead of the diner, and these three cars, the dome-lounge, diner and lounge-dormitory, proved Santa Fe’s claim that the new Super Chief set “a new world standard in travel.” The three cars incorporated a total of 123 non-revenue seats to pamper the Super’s first class passengers. 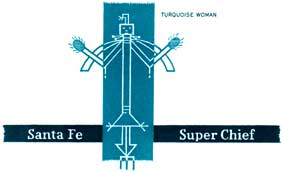 The lounge-dormitory cars provided more than just a pleasant place to take in the scenery, have a drink or write a letter. In addition to 29 lounge seats, the cars included a full-service barber shop, complete with shower. (The barber service was discontinued at an unknown date.) The crew dormitory space included two toilets, two showers and 18 crew bunks, all within a space about seven feet wide and just under 30 feet long. 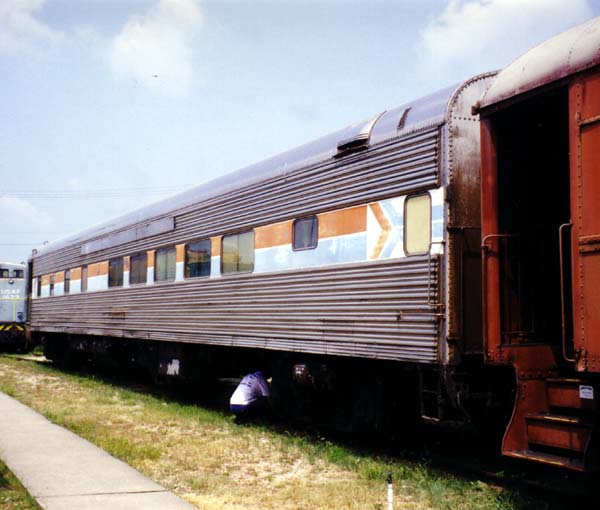 No. 1344 at Galveston shortly after being donated to the Gulf Coast Railroad Museum. A number of repairs had to be undertaken before the car could be moved to Houston.

In January 1958, with traffic levels declining, Santa Fe began running the off-peak season Super Chief and its extra-fare all-coach counterpart, El Capitan, on a combined schedule, but with separate diners and lounges for coach and Pullman passengers. When the trains ran combined, the six lounge-dormitory cars generally were stored and saw service only during peak traffic seasons in the summer and at Christmas when the combined Super Chief/El Capitan ran in two (or sometimes more) sections. These summer/holiday assignments continued until 1962. 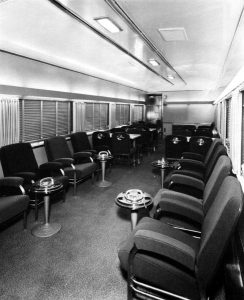 The lounge as built by Pullman Standard for the Super Chief.

Due to its family fare structure, the Santa Fe saw an increase in passenger demand in the summers of 1963 and 1964. The train ran in three sections on Mondays and Thursdays, with the lounge-dormitories running behind the Super Chief’s first class diner. On other days, the cars apparently served El Capitan passengers, running ahead of or behind the lunch counter diner.

The lounge-dormitory cars worked in subsequent years only when the train ran in two sections during the summer and at holidays, running behind the diner as originally intended until about 1969, when consist records show the cars running at the front of the train behind the baggage cars. During the winter of 1970/1971, the cars were again stored.

In May 1971, the National Railroad Passenger Corp., or Amtrak, took over operation of most of the nation’ intercity passenger trains, including the Super Chief/El Capitan. No. 1344 and its five sisters had turned their last wheels for the Santa Fe. 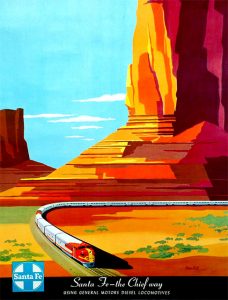 Amtrak acquired most of Santa Fe’s passenger cars in 1971, including the Super Chief lounge-dormitories. Apparently, as the cars were not immediately needed for service, they were among the first to be refurbished/rebuilt by the new national carrier. According to one published source, the program to rebuild the cars to 31-seat buffet-lounge-dormitory cars began almost immediately after Amtrak’s formation. No. 1344 became Amtrak No. 3395. The buffet’s installation added food service capabilities to the cars. In Santa Fe service, the cars had been serviced by attendants working out of the dining cars.

The car’s early 1970s Amtrak interior is substantially intact, adding another dimension to the museum’s unique car collection. Some “backdating” will take place – a vintage barber chair has been acquired by the museum for installation in the barber shop, which is otherwise substantially intact.

According to a former Amtrak employee, No. 1344 was regularly assigned to Amtrak trains 15 and 16 operating between Houston and Chicago from 1973 to 1976. Additional research is needed to chart No. 1344’s Amtrak service history and its subsequent travels until its 1999 donation to the museum. 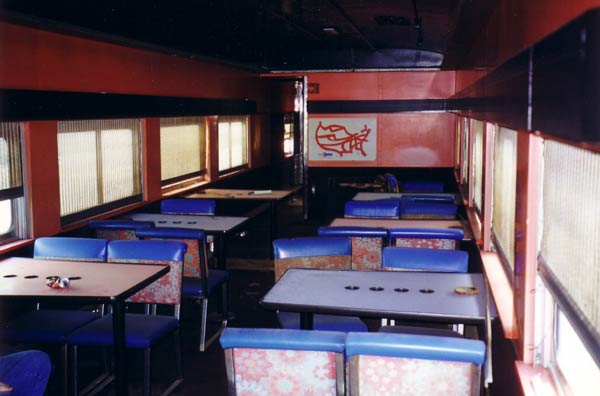 The lounge in all its Amtrak 1970s glory.