Learn More About The Texas Railroading Heritage Museum At Tomball 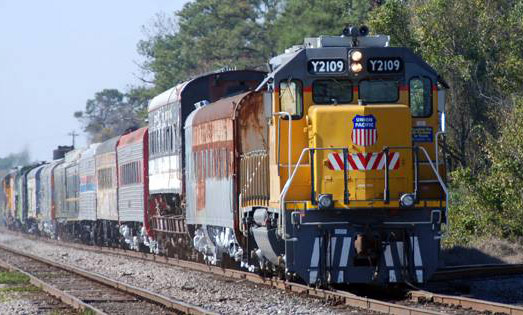 The Texas Railroading Heritage Museum at Tomball is a project of Gulf Coast Chapter – National Railway Historical Society, Inc., in partnership with the City of Tomball and Harris County. The site, which is owned by the city of Tomball, was acquired specifically for development of the museum. Gulf Coast Chapter – NRHS owns most of the railroad cars, locomotives and other artifacts. The chapter formed the nonprofit museum corporation in 2011 for the purpose of developing a new museum to tell the story of railroading in the region.

Gulf Coast Chapter – NRHS was founded in 1961 as the Gulf Coast Railroad Club, becoming an NRHS chapter in 1967. The chapter’s preservation efforts began in 1968 with the donation by the Missouri Pacific Railroad of chair car No. 1141. The collection has since grown to include a variety of locomotives, freight cars, passenger cars and other items, most with a Texas connection.

The National Railway Historical Society (NRHS) was founded in 1935 and incorporated in Maryland in 1937 as a nonprofit organization for historical and educational purposes.  With over 100 chapters in the U.S. and Canada, NRHS membership totals more than 15,000 people with the common bond of a shared interest in railroading and railroad history.

Gulf Coast Chapter – NRHS originally was headquartered in downtown Houston at Houston Union Station. The collection moved to the Railwood Industrial Park at the invitation of Weingarten Realty Co. in 1978. Weingarten and the chapter shared the expense of improving the Railwood property. In the mid-2000s, an effort was launched to find a new location for the museum, and that effort culminated in a 2015 agreement with the City of Tomball to establish the Texas Railroading Heritage Museum at Tomball.

TRHM is a nonfprofit 501(c)(3) educational organization incorporated in the State of Texas and most donations to the museum are tax-deductible.